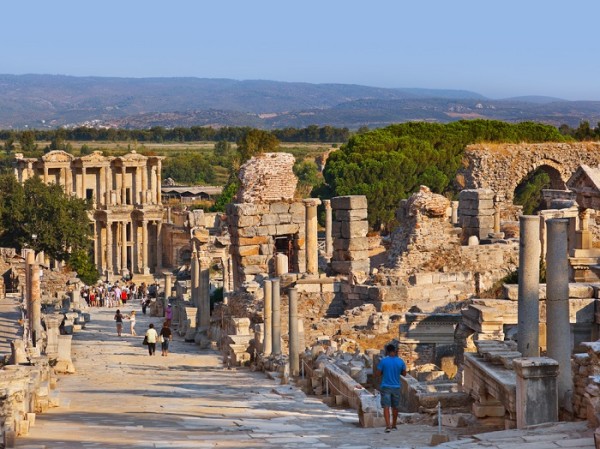 Ancient Ephesus held one of the 7 Wonders of the Ancient World.

Ancient Ephesus was one of the 7 Letters to the Churches in Revelation.

Ancient Ephesus still attracts the tourist dollar. It is a favorite destination.

Today a ruined Ephesus holds the ruined Temple of Artemis – the goddess of the hunt, chastity, childbirth, wild animals and the wilderness. This temple is four times larger and more beautiful than the Parthenon. It is one of the 7 Ancient Wonders.

Ephesus is also a crowning glory of many great ancient civilizations who occupied it.

Legendary wealth, the world center of trade, the leading seaport on the Aegean Sea - all these stamped Ephesian authority across the Mediterranean.

Ships arrived in the man-made harbor met caravans of merchants hungry for profit.

Wealth abounded. Who could wish for a better place to live?

Ephesus too is famed for its equal opportunity for men and women. A city ranked second only to Rome as a cosmopolitan center of culture and commerce.

Are you getting the feeling that Ephesus was a 'pretty special' ancient city, maybe without peer?

BUT, Ephesus had a very dark side.

Nobles in the city often had a wife and also several lovers. Promiscuity was a plague within.

The city leaders were known to frequent the famous Library of Celsus. The library contained a now famous secret passage from under it to a nearby brothel.

Ephesus was the world capital of the slave trade.

Ephesus was as corrupt as it was famous.

AND, the Bible records its hostility to Christians as it defended the cult of Artemis. (See Acts 10)

Long ago the true Ephesus was lost. Ruins only survive.

Ephesus was defeated by silt. It is now ten kilometers inland and surrounded by swamp.

What is highly valued among men is detestable in God's sight. (Luke 16:15c)

The proof is in the silt.

'Sympathy is two hearts tugging at one load.' ~ anon

#A big thanks to the subscriber who penned today's SoulSnack. It contains edits from SoulSupply