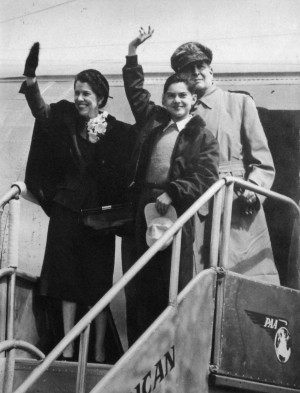 General Douglas MacArthur was a father of prayer. He and his wife Jean only had one child.

General MacArthur's prayer over his son is significant. It was recorded, and his prayer has now stood the test of time.

His deep and wise thoughts are not to be glossed over, but rather purposely considered - even pursued.

He prayed to God:

Build me a son, O Lord, who will be strong enough to know when he is weak, and brave to face himself when he is afraid; one who will be proud and unbending in honest defeat, and humble and gentle in victory.

Build me a son whose wishbone will not be where his backbone should be; a son who shall know Thee and that to know himself is the foundation stone of knowledge.

Lead him, I pray, not in the path of ease and comfort, but under the stress and spur of difficulties and challenge. Here let him learn to stand up in the storm; here let him learn compassion for those who fail.

Then I, his father, will dare to whisper, 'I have not lived in vain.' ~ AMEN

The prayers of a righteous father are of unspoken, unknown and eternal assistance.

Sons are a heritage from the Lord. children a reward from Him. Like arrows in the hands of a warrior are the sons born in one's youth. Blessed is the man whose quiver is full of them. (Psalm 127:3-5a)

'A man is immortal until his work on earth is done.' ~ George Whitfield

Love this SoulSnack? Please share it with a friend.