Can only a righteous man recognize righteousness? 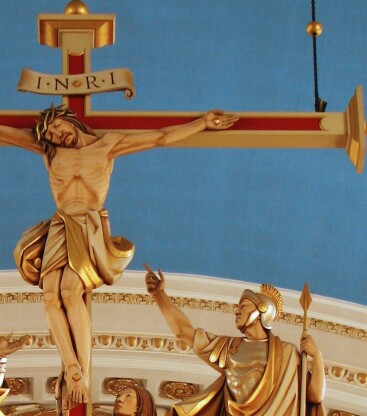 The centurion, seeing what had happened, praised God and said, "Surely this was a righteous man."  (Luke 23:47)

This forever unnamed centurion, a purveyor of recognition and truth has spoken correctly for two millenia now. He will continue speaking until eternity arrives.

There is no surprise that the Roman army was there.

The Centurion may have even overseen the erection of THE cross! The execution of criminals and the crowd control were part of his domain. It was a tough and rough day, yet tragedy and distress would not hinder his estimation of Jesus.

In a place where there was no peace, this soldier praised the Prince of Peace.

The centurion scribbled and unseen, indelible and verbal line of truth across the ancient sands of time. His deft finger etched a truth that can never be lost to wind blown dunes, storms or remoteness.

This career soldier's commands had echoed to 100 men, now they still resound. He spoke living words leaping from the pages of living Scripture.

There would be no shaking in this commander's voice. No fear that the murderous crowd and jeering subordinates may not respond well to his testimony.

A righteous man is rare.

A righteous man is to be revered.

A righteous man is to be recognized.

Such righteousness is never to be rejected.

Can only a righteous man recognize righteousness?

Surely, the liberating answer is - 'no'! For, I have too!

“He is no fool who gives what he cannot keep to gain that which he cannot lose." ~ Jim Elliot